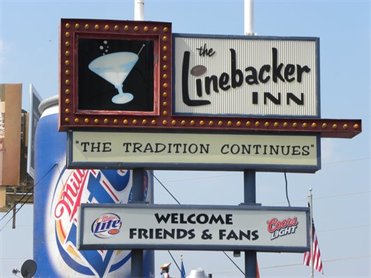 The Backer and I were reunited last night! For those of you who don’t know what The Backer is, it’s by far my favorite South Bend establishment. It’s sketchy, sure, but it’s wonderful.

I missed The Backer. The sticky floor, crowd, townies, smoke, and the pole. But this post is not to declare my love for the backer. It’s to show for those of you who’ve been to The Backer my new favorite photo of this fine establishment: 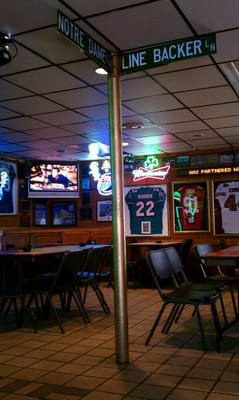 Yes, that’s right. It’s clean. The tables are out. The smoky haze isn’t present. You can actually see what’s on the walls. You see… this is the backer I know and love:

Full of people. Can’t usually see very well where your friends are so you plan out ahead of time to just go to the corner you usually meet in. And need to sneak in past the townies sitting at the bar to order a drink. This is the backer I know and love.

But I forget that during the day food is actually served. Which is why the second picture in this post – the clean backer – is my new favorite. Next football game I think I’ll attempt a backer meal. Just because.

The juice glass. A band tradition. What did I do with my juice glass today that’s so remarkable?

I actually drank orange juice out of it instead of beer, pop, water, or various other drinks that I’ve used it for (none of which include juice)!

This makes me feel old. And somehow like I’m following directions.

The Other Side of the Career Fair

This week I was fortunate enough to be able to attend the ND Career Fair as a recruiter. I dreaded career fairs when I was actually looking for jobs. I hated trying to figure out what was going through the minds of recruiters, trying to look up every possible tip on getting a job, and awkwardly selling myself to people I highly doubted would remember me five minutes later.

From the other side of things I can say I was wrong on one thing: there are some people I remembered 5 minutes later… but in many cases that was not a good thing.

“So… I’m new to the career fair, can you tell me what I’m supposed to do?”

“I’m in the process of switching majors. All I know is I don’t want to be a finance major anymore, but I’m not sure what I’m switching to. Do you have any jobs that I might qualify for?”

Um… While these questions all help me figure out from the first question that I’m not talking to someone who actually wants a job with Abbott IT, I also felt bad for these students. Finding jobs is hard enough for people right now, and I have low hopes for those particular students’ job search. At the same time I know that I (and the portion of the ND world who ACTUALLY wants a job) spent at least a LITTLE bit of time figuring out which booths were worth going to!

The career fair taught me that effort truly pays off. There were some people that were so prepared with questions I felt like I was being interviewed! There were students who were sending thank you emails on their phones after every booth! There were some students with resumes that made me feel like I should be the one working for them!

Mendoza students are taught all sorts of tips for finding a job in the real world, and my experience on the other side of the career fair taught me just how valuable that advice can be. Well, how valuable it can be if people actually take the advice to heart…